As a starting point for my masterplan of late (writting a language), I’ve recently finished reading this book. So let’s share some thoughts about it.

To be honest, “read” only applies to about 50 % of it. The rest of it I’ve only “skimmed through”, either because it’s too basic (the lexing and parsing chapters) or too advanced+concrete+cumbersome+terse+boring+I-know-LLVM-will-handle-this-for-me (most of the polymorphism, OOP and dataflow chapters, implementation details of optimizations, etc.).

First, I’ll talk about my background, so that I put my views into context: I’m kind of into languages. I’m at a very very “beginner” stage, though. I’ve been following language people on Twitter, I did the usual Dragon-Book-based compilers course at college, I’ve been paying attention to the development of a few languages, specially Go and Rust, and I’ve read a paper or two. But that’s it, I’ve never really done any real compiler or language design work.

From that, the book felt a little light in that I already had at least some notion about most of its concepts. I was expecting to get the missing pieces in my knowledge, but I didn’t really get them. Instead, those concepts got consolidated and I’d be more confortable designing a compiler now. But there were few “aha” moments for me. This is hardly the books’ fault, though.

I think this book would work pretty well as an introduction to all this. Definitely better than the Dragon Book! 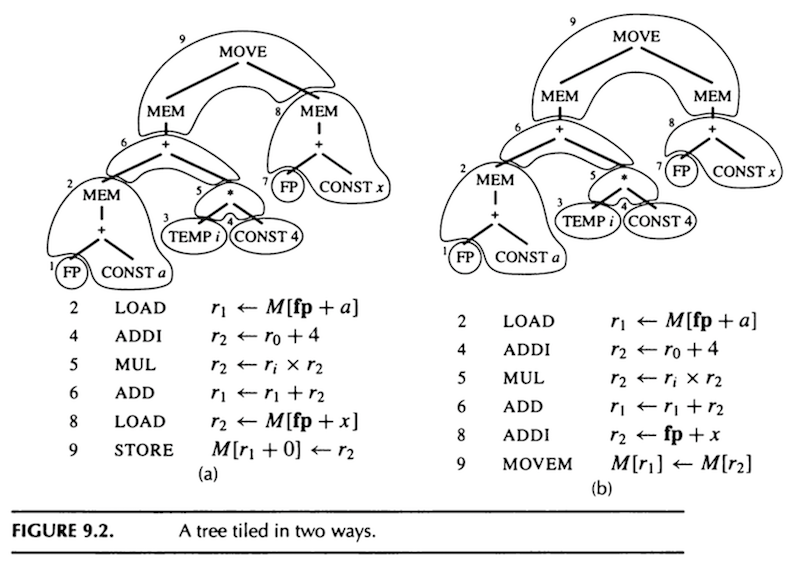 From IR trees to instructions

The first half of the book is about building a compiler for a toy language; you’re expected to follow along actually writing it on top of the downloadable base ML code (hint: I didn’t, but some people did). The second half proposes several ways the compiler and/or the language could be extended. Thus, the former reads more like a tutorial than the latter.

The explanations are mostly good, and the prose is well-crafted and easy to digest. While some effort was put to explain the rationale behind everything, in the end many things feel too prescriptive, too “just do this” specially on the first part. Concretely, little to no effort is put on discussing the architecture of the compiler code itself, how pieces fit and interact together, and the source code comes with no comments at all. (Special mention goes to the procEntryExit[123] functions. God, I sometimes wonder if many university professors have ever read a line of code!) Figures, graphs, example snippets and such are often used to great effect, moreso than plain algorithms (or, God forbid, operational semantics or formal proofs).

The book is like 20 years old now, so some areas I’d be interested about, moreso than the intricacies of optimizations, register allocation, etc., are not even mentioned. The runtime system gets very little love. I continue to know nothing about ELF and DWARF. Nothing at all about concurrency and green threads. Nothing about JIT, or interpreters. And little about interfacing with the OS in general. In any case, the book is already thick enough, but I’d have been nice to have those explained at depth within the coherent framework set up by the book, instead of having to read about it from papers and different projects or books with their own idiosyncrasies that I have to forcibly fit into my head.

Right now, I’m more interested in language design than implementation. But, being very conscious about how deeply they influence each other, it’s great that I know how things like instruction selection, call stack management and register allocation actually work so that I can keep that in mind while designing features. This book discusses more design aspects that I was hoping for, anyway, which is great! It has different chapters for implementing generics, functional stuff (closures, etc.) and OOP stuff (inheritance, dynamic dispatch), so you can pick and choose and get a feeling of how those are typically implemented.

I’m glad I got to read this book. It felt kind of like a rite of passage. Now, I’m initiated and I can go and write a compiler which probably would even ressemble a little what real compilers look like, so I won’t be laughed out of the big boys rooms that hard maybe. I’ll probably be able to go deep into most compiler’s code bases and not get too lost about what’s going on, and how, and why —which I expect I’ll need to do often when building my own.

I definitely can recommend it. Go for it.